A Brief History Of Slingerland Drums

The “Slingerland Banjo Company” was founded by Henry Heanon (H.H.) Slingerland (1875–1946) in 1912. Slingerland had won a correspondence school of music in a card game aboard one of the gaming boats that once cruised Lake Michigan. He then opened a music school in Chicago, and soon turned to manufacturing musical instruments as well. As its name indicated, the company started out producing banjos while importing ukuleles from Germany, but set up its own production because it could not meet demand. Soon, they produced their own musical instruments[3] and eventually, also guitars (including electric guitars from 1936 or earlier). Production of snare drums was started in 1926 in answer to the entry of the Ludwig & Ludwig drum company into the banjo market. 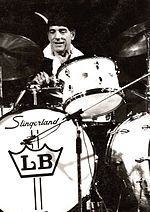 A resourceful and energetic businessman, H.H. established an extensive dealer network throughout the U.S., the then-territory of Hawaii (in the early 1930s) and China. After H.H.’s death from a stroke, the company was run by his wife, Nona, and one of their children, Henry Jr. The company’s manufacturing plant was later moved from Chicago proper to Niles, a suburb in Cook County, Illinois.[3]

Although the Slingerland company was best known as a drum kit manufacturer, it also made guitars in the 1930s.[4] The Songster electric guitar, featured in a 1939 company catalog, pre-dates Les Paul’s “log” guitar and is probably the earliest Spanish-style solid-body electric guitar model. The guitar’s pickup includes individual string magnets as well as a large horseshoe magnet. Slingerland ceased making electric instruments in 1940 in order to exclusively focus on producing percussion instruments.

The company remained in the Slingerland family until 1970, but continued to be a prominent drum manufacturer throughout the 1970s. After introducing the Magnum series in the late 1970s, Slingerland lost its footing, and the company folded.

A New Lease On Life

In 2003, Bernie Stone found what turned out to be the RF (Radio Frequency) machines that were responsible for building Slingerland drums from the early 1930s on up to their last kits being built circa 1998. He then purchased them and with the help of an electrical engineer friend, many hours were spent refurbishing the circuitry and components of these mysterious relics.

The first few runs of shells were hit & miss in terms of quality, as Bernie was beginning to get a feel for these instruments. Until one day, he made the connection with Bud Moritz, the “Grand Poobah” of the RF machines, as he was floor manager at Slingerland for decades. A few hours with him provided enough information to make the finest shells he’s ever made.